One Twenty Fourth: The Third Meaning 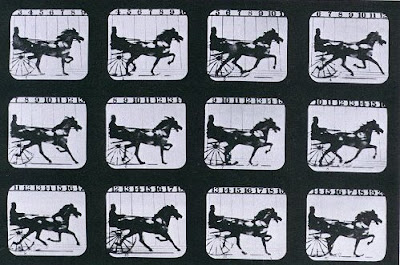 In his essay “The Third Meaning,” cultural theorist Roland Barthes—maybe the man who has written most compellingly about the ways in which we receive visual media—conceives of three levels of signification shared by all film images. The first two of these meanings make logical sense: they encompass the predominant ways in which audiences usually process the flow of images projected before them. According to Barthes, the first meaning represents an informational or communicational level: the image(s) offer information about the setting in which we're currently situated, about the characters within that setting, about the situation or series of events that is currently playing out onscreen, and so forth. This first meaning is narratively significant, then, but it's also sensorial: the images tell us what's going on, but they also signify simply where we are, how things look, observing scenes and scenery as they pass before the camera. The second level in Barthes' schema is a metaphorical or symbolic level, in which distinct images may represent larger, theoretical ideas with which the film is preoccupied. In his essay, Barthes is analyzing a series of still images from Sergei Eisenstein's Ivan the Terrible; as an example of his second meaning, he cites an image from that film in which a shower of gold rains down upon a character, conveying not only a narrative event within the setting, but also one of the film's broader metaphorical conceits—that greed can literally overwhelm and suffocate human beings. The second meaning still communicates information, then, but of an implied, symbolic sort. When we watch, process, respond to, and evaluate cinema, it is usually according to these first two meanings that we operate—narrative, aesthetic beauty, metaphorical meaning and theme.

But Barthes' third meaning may be his most fascinating, and it's the category with which his essay is predominantly concerned (as the title makes clear). We watch the images within a film, flowing before us, and something strikes us, something uncanny, whose meaning cannot be so easily discerned. These are small but significant visual features that do not convey narrative or symbolic information, but still do contribute to the overall visual fabric of the film. A flicker of light reflected off of water; the contrast of a red shirt against a pale blue wall; a bizarre-looking extra who happens to stroll through the background of a street scene; the worn texture of a wooden table, a blatantly artificial prop, the toothpick that dangles precariously from Bogie's mouth—these are things that add to your movie-watching experience, but on a level of signification, they don't really mean anything.

This third meaning—which Barthes also, importantly, labels the “obtuse meaning”—is something that seems to extend outside of culture or knowledge or information. It is what it is: it's pleasing quite purely in the way that it looks. It is something that can only be achieved by the visual media—in other words, by something non-real—but its appeal is broader than mere artifice; these cinematic images are real, in the sense that we see them, respond to them, love them. In the fissures and cracks of the filmic image, when we realize that pictures on film are indeed unique in a limitless number of ways, the transfixing real-unreal rift by which cinema operates becomes quite clear. This is what the third meaning is about: realizing that these images are illusions, and becoming simultaneously enraptured by how immersive, striking, and real they are.

Barthes then arrives at a paradox of sorts, which is the heart of the matter, as far as I'm concerned: this third meaning is so alluring, Barthes writes, because it is purely cinematic, a pleasure that can only be derived from the act of watching film. In other words, we can adequately relate in words what a film's story is or why it is told well or how it conveys its themes intelligently, but we can not really explain the third meaning in words; it is entirely visual. At the same time, however, Barthes declares outright that the “third meaning” can really only be gleaned from a film still, not from motion pictures—only when we halt the ceaseless flow of celluloid, breaking down persistence of vision into its fragments of one-twenty-fourths of a second, can the third meaning be discovered. The “specific filmic,” Barthes writes, lies in this third meaning “that neither the simple photograph nor figurative painting can assume since they lack the diegetic horizon.” What he seems to suggest here is that the essence of the film is not in visual movement but in suddenly arresting that movement, defining a still image by its context within the diegesis—what comes before and after it. By revealing the machinery by which cinema operates, we can parse out its essence.

This does indeed run counter to what most theorists claimed at the birth of cinema, and even what many critics and theorists continue to believe (and which I've always believed): that film is distinct because it's the only art form that catalyzes visual media into motion. (Digital moviemaking is thus included in the broad rubric of “film,” even though that categorization is of course totally incorrect. Film and video are different art forms. But for our intents and purposes, they do operate according to similar processes of mediation and vision.) In the 1910s especially, theorists like Hugo Münsterberg and Jean Epstein claimed that projecting a rapid succession of still images onto a flat two-dimensional plane—thus animating still photographs into movement—encompassed an entirely new mode of vision, not only of viewing art. They thought that the simultaneous artifice and apparent actuality of cinematic images allowed for manipulations of visual form that made film the most beautiful art form they had yet witnessed. It's hard (for me, anyway) to disagree with this theory; the obvious artifice of cinema combined with its totally immersive and convincing visuality is what makes both its realism and non-realism so potent. But Barthes disagrees that the convincing illusion of cinematic movement is what defines the art form; as he himself writes, “the 'movement' regarded as the essence of film is not animation, flux, mobility, 'life,' copy, but simply the framework of a permutational unfolding and a theory of the still becomes necessary.”

But even since the writing of this essay (Barthes originally wrote it in 1970), a theory of the cinematic still has rarely been satisfactorily achieved, or even attempted. Most viewers do indeed still perceive of film as a moving art form, which is totally understandable and seems justified: they are, after all, “motion pictures.” The transfixing nature of cinema means that we usually don't think of the hundreds of thousands of still images that make up the flow of life before us. But should we? Is Barthes correct that the essence of cinema can only be ascertained by suspending or halting this motion?

Ergo, I'd like to start a series of articles that does indeed posit a “theory of the still,” which I will (somewhat self-indulgently) label One Twenty Fourth. These articles will take a single film still, one-twenty-fourth of a second, from a single film as a jumping-off point for theorizing about cinematic sight, movement, the nature of narrative, the rift between realism and non-realism, the mechanics of filmmaking and projection, how the similarities or differences between cinematic sensation and real life unsettle or astound us, and so on. I have no idea what conclusions these articles will lead to, and have no preconceived theory about the cinematic still that I'd like to arrive at. I'd simply like to further explore the anomaly, the almost-oxymoron, of the cinematic still. What happens when we take these images out of their movement?

A few additional points in Barthes' article that I'd like to keep in mind while writing these articles: What does he mean when he writes about film's “diegetic horizon” or its “permutational unfolding”? Or when he claims that the cinematic still “offers us the inside of a fragment”—how does this temporality differ from that of real life or other art forms? What does he mean when he claims that analyzing a filmic still requires a “syntagmatic disjunction of images” and for a vertical rather than horizontal reading of cinema? When he says that the still is not a sample of a film but a quotation? These thoughts and others are points that I hope will take on further depth when applied to specific film stills in this series.


If you'd like to read the entirety of Barthes' article—which I recommend, since it remains one of the most thought-provoking and complex articles on cinema I've ever read—here's a link to it:

I’ve only tried one essay service but I can tell you that the website I used was really solid. It’s called DigitalEssay.net. Basically you get to pick a writer and you can communicate with them through an internal chat system which makes explaining how to do specific assignments a lot easier (especially if your teacher is a hard-ass like mine was.) Good luck with your paper!

Newer Post Older Post Home
Subscribe to: Post Comments (Atom)
Yes, the kingdom of apparitions is of this world, today it is this world, and the serious or mocking men who handle the creaking gates open them to new phantoms, who carry strange rays of light in their footsteps, in the folds of their mantles. Watch out for the period that's coming! This world is already cracking, it bears within it some unknown principle of negation, it is crumbling. Follow the rising smoke, the specters' lashings in the midst of the bourgeois universe. A bolt of lightning is lurking beneath the bowler hats. Truly, there is diabolism in the air.